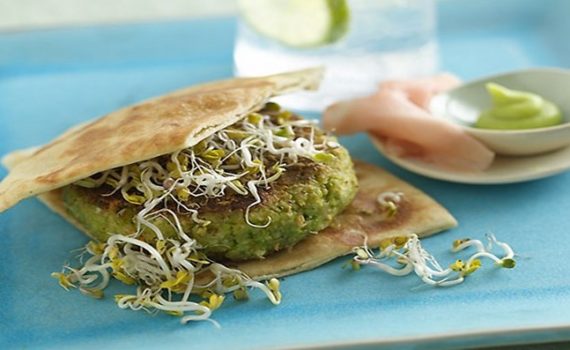 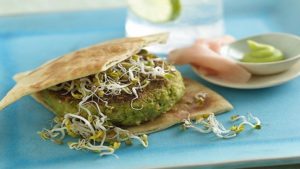 1) Heat the millet in a small dry saucepan, with a tight-fitting lid, over medium-high heat and cook, shaking occasionally, until the millet begins to “pop”. Continue toasting the millet, for about 2 minutes, until the popping subsides and until it smells like freshly popped popcorn. Set aside to cool slightly.2) Add the water and 0.25 tsp of the salt to the saucepan and bring to a boil over high heat. Wrap the pan lid tightly with a small tea towel and cover the saucepan. (Make sure the towel’s edges are folded up well away from the heat.) Lower the heat to low and simmer covered, for 20 minutes. Remove from the heat (don’t uncover) and set aside for 10 minutes. Fluff the millet with a fork and transfer to a large bowl.

3) Grate the carrot and radish into the bowl of millet. Add the ginger, garlic, lime juice, mirin, and chili paste and stir to combine.

4) Meanwhile, bring a medium pan of water to a boil and salt it generously. Add the edamame, cover, return to the boil and cook for about 5 minutes, until soft. Drain and immediately add to the bowl of millet mixture. Stir to combine and set aside to cool.

5) When cool, season the edamame mixture with the remaining 2 tsp salt. Transfer to a food processor and puree into a paste. Return the edamame to the bowl and stir in the panko and egg whites until incorporated.

6) Using your hands, form the edamame mixture into 8 patties about 7–8 cm in diameter. Place on a greaseproof paper-lined baking sheet and refrigerate until set.

7) Place a rack about 10cm from the grill element and preheat. Place the patties on a foil-lined baking sheet or grill pan. Brush both sides of the patties lightly with oil, sprinkle with salt and grill for about 3 minutes, until the tops are lightly browned.

8) Remove from under the grill and turn the patties over. Grill for a further 3 minutes, until lightly browned and piping hot. (The burgers can also be barbecued or sauteed.)