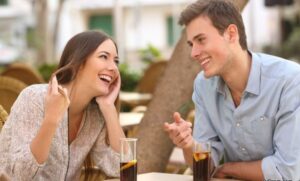 A platonic friendship or platonic love is “an intimate relationship, especially between two persons of the opposite sex, that is characterized by the absence of sexual involvement…” According to dictionary.com.

Basically, platonic love occurs when a man and a woman have a special bond where they deeply care for and respect each other, lean on each other in great times and in hard times, and share similar interests and values, but they don’t pursue things romantically.

With platonic love, you could even feel love at first sight if you’re drawn to someone instantly because you two share a passion for a certain activity or subject. But love in the romantic sense just isn’t part of the equation. (At least not intentionally, more on this later.

A platonic love relationship is not friends with benefits or hooking up. There can’t be a sexual aspect to the relationship or it will no longer be considered platonic. Platonic lovers just aren’t a thing.

Since there are no romantic feelings on both sides in order for a friendship to be platonic, unrequited love or feelings from one person — or both people — would also disqualify a relationship from being platonic.

At some point, one or both people might experience some passing sexual tension or briefly wonder, “What if we did try dating?” It may seem like the relationship could go either way — continue as friendship or turn toward romance.

Platonic relationships can be fun and healthy. It’s a chance to get to understand the cerebral side of someone, instead of how good they are in bed. There are no demands, just sharing good times. Maybe if more of us just sat and talked, we might be able to fix the world.

Men and women have vastly distinctive views of what it means to be “just friends” — and that these different views have the potential to lead to problems. Although females seem to be genuine in their belief that opposite-sex friendships are platonic, men seem unable to turn off their desire for something more. And even though both genders agree overall that attraction between platonic friends is more negative than positive, men are less likely than females to hold this view.

Thierry Mugler: The life and heritage of one of th

How To Avoid Conflict with A Covert Narcissist #ps

8 Things Every Person Should Do Before 8 A.M.

Nails: Matcha nails are the new trend for your man

What Happens If You Only Eat One Meal A Day #healt