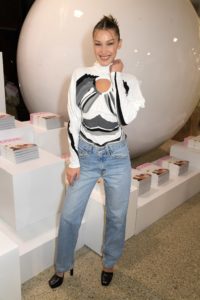 Remember those tendrils that once framed the late ’90s and early-aughts faces of Christina Aguilera and Julia Stiles? Now they’re resurfacing on Instagram feeds and red carpets alike.

“It’s not an easy look to pull off,” laughs celebrity hairstylist Chris Appleton of the It girl-approved style that’s recently made a major comeback. “But all of a sudden, it looks kind of cool again.” Appleton is the man behind Dua Lipa’s Grammy’s look and Jennifer Lopez’s SAG Awards hair—both of which featured the chunky chin-grazing strands.

Those two stars aren’t the only ones feeling nostalgic. Last week, Kylie Jenner arrived at the Tom Ford show wearing her own version of the hairstyle, while last night in London, 90s fangirl Bella Hadid stepped out for a fashion week event sporting two uber thin pieces of hair on either side of her cheekbones.

“You have to have the right amount of hair,” explains Appleton, adding that an inch on either side of the part is the most perfect rule of thumb. As for the length? “It has to frame the jaw,” he says. “If it’s too long, it just kind of sticks out.” And while some opt for a ponytail or textured bun to collect the majority of the hair, Appleton usually goes for something a bit tighter. “I always like to leave the rest of the hair snatched and slicked behind it,” he says, which helps the look feel “a bit more modern.”

“For a while, it was a real no go,” he says of the style, noting it could come off as “cheesy.” But just like anything in fashion—even those 90s fuzzy bucket hats you swore you’d banished for good—everything that’s old becomes new again.